How to wire a plug

How to wire a plug – this article is intended to guide you in how to do it, to make your appliance DIY safer.

In the UK we operate on a 230 volts electricity supply which has the power to kill if it’s not used sensibly. Electrical appliances, circuits, leads, plugs etc. are specially designed to reduce the chances of you receiving an electric shock; but only if they are managed correctly.

We don’t all need to know how to manage electrical circuits correctly, that’s why we have electricians but we should understand the basics, like wiring a plug. This guide is intended to help you to wire a plug correctly.

How do you wire a plug?

Wiring a plug seems to cause all kinds of confusion, which it shouldn’t really as it’s not that complicated, if perhaps a little bit fiddly. When we’re working we actually come across people quite often who jest us with things like – “what’s the point of PAT Testing; anyone can wire a plug”, only for us later to find an incorrectly wired plug, done by that very same person!

But don’t let that put you off. If you follow these simple steps you will be able to wire your plugs without too much hassle.

To help you, all new plugs come with a handy cardboard wiring diagram, placed over the pins. This should be removed to use the plug, but as a guide for wiring it is perfect and includes everything you need from the which holes to put the wires in, to how long to cut them. You can’t go wrong.

We actually come across a lot of plugs that have been wired incorrectly by people who claim to know what they’re doing, and it is often those people putting themselves at risk. Wiring a Uk plug is a skill that shouldn’t be undervalued.

Everyone should understand the basics of a correctly wired 3-pin plug, and also be able to recognise any errors. If you don’t then this guide is for you.

Note: If the plug you are wiring only has 2 wires; live and neutral (brown and blue) then all you do is not do the part that refers to the earth wire.

This is an image of an incorrectly wired plug to show you how easy it is to get it wrong.

What’s wrong with the wiring in this plug? To the untrained eye it may not be obvious and you can be forgiven for missing the issues, for now.

The main issue here is the Live (brown) and the Neutral (Blue) wires are wired incorrectly; they should be opposite to what they are. The other issue with this picture is the (white) cable has not been clamped correctly – the white outer sheath should come into the plug casing and be firmly fixed in place by the clamp (the black part which is above the wires in this image).

To be fully correct, the coloured wires should have been cut at better lengths so that the white covering is fully into the plug before it is secured. Most plugs actually have a cable grip that screws across the main outer insulation sheath.

An electricity cable (or flex) used for connecting an electrical appliance to the plug will usually contain two or three wires wrapped in coloured insulation. These are commonly called “two core”, or “three core” cables; not to be confused with “twin and earth” which is the term used for mains wiring cables, although there is no real reason why the terms can’t be interlinked.

Each coloured cable has copper wires inside because copper is a good conductor of electricity. The outer layer (what we tend to refer to as the “wire” is flexible plastic, as plastic provides good insulation; this wire is commonly referred to as the “flex”; short for the “flexible cable”.

The inner wires of the flex are are colour coded:

The plug itself has 5 main features:

Wiring a plug is an easy process, sometimes fiddly though. You’ll need a screwdriver and perhaps a set of ‘snips’:

Let’s presume for this exercise that the wires have been prepared so we can use this easy is easy to remember saying:

sTriped – (straight to the) top

Whilst it is handy to know how to wire a plug it’s not something you’re going to need to worry about if you use us for your portable appliance testing, as we’ll do it for you.

Get in touch for a PAT testing quote or to discuss your needs.

How to wire a plug step by step guide Step 1: Cut back the outer sheath (black) of the flexible cable, to get access to the coloured wires underneath; give yourself plenty of wire to work with. Line them up on the diagram of the plug so you can see the lengths to cut them to. 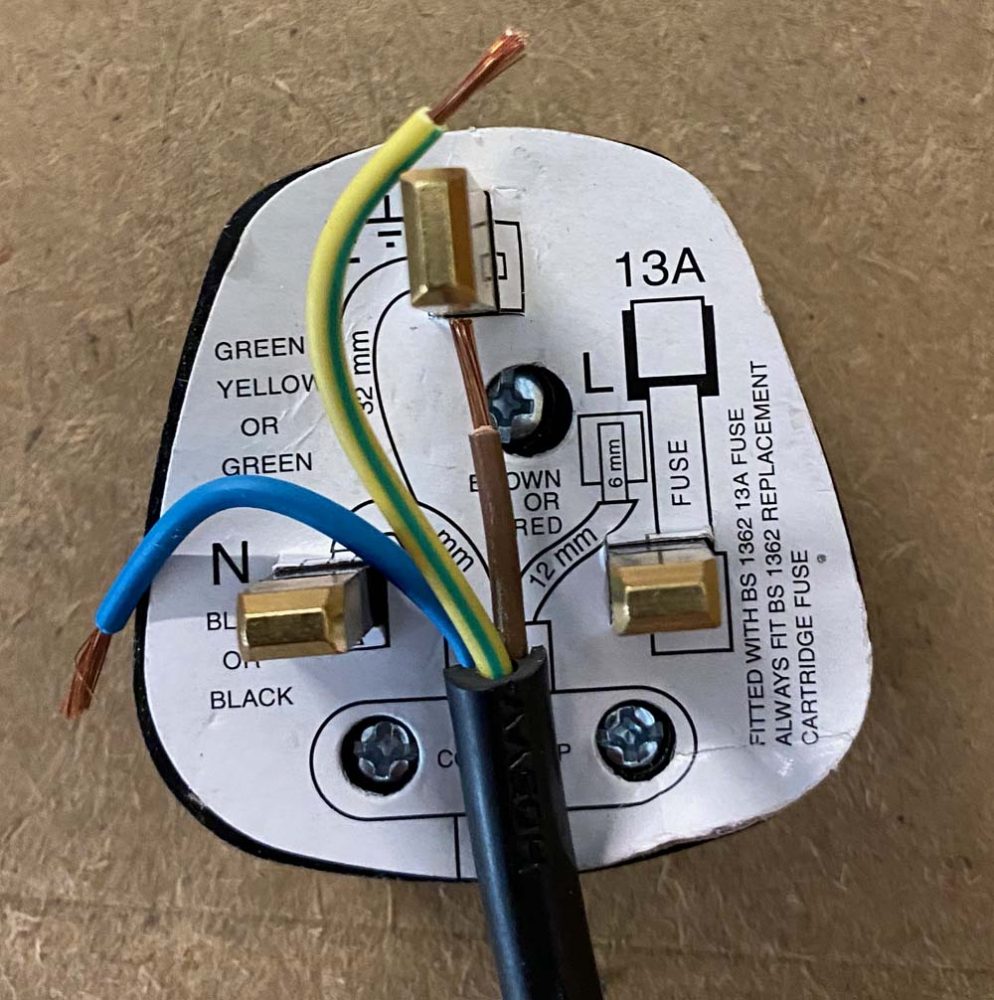 Step 2: You need to cut the wires down to size; doing each one in turn line it up on the diagram and mark the length, then using the snips carefully cut off the outer insulation leaving the copper wires exposed. You don’t need much copper exposed, about 6mm should be sufficient. 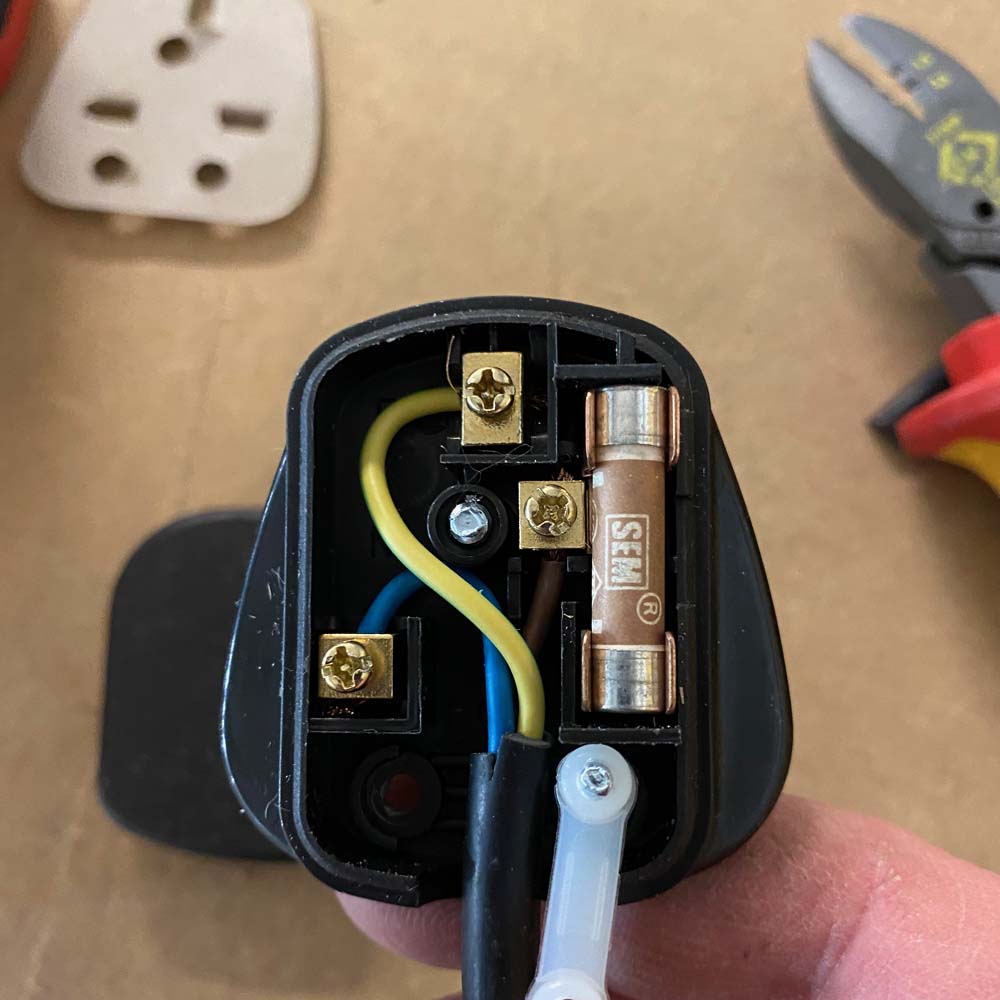 Open up the cable grip too; totally remove one screw, and loosen the other so you can turn the grip to a right angle from its standard position. 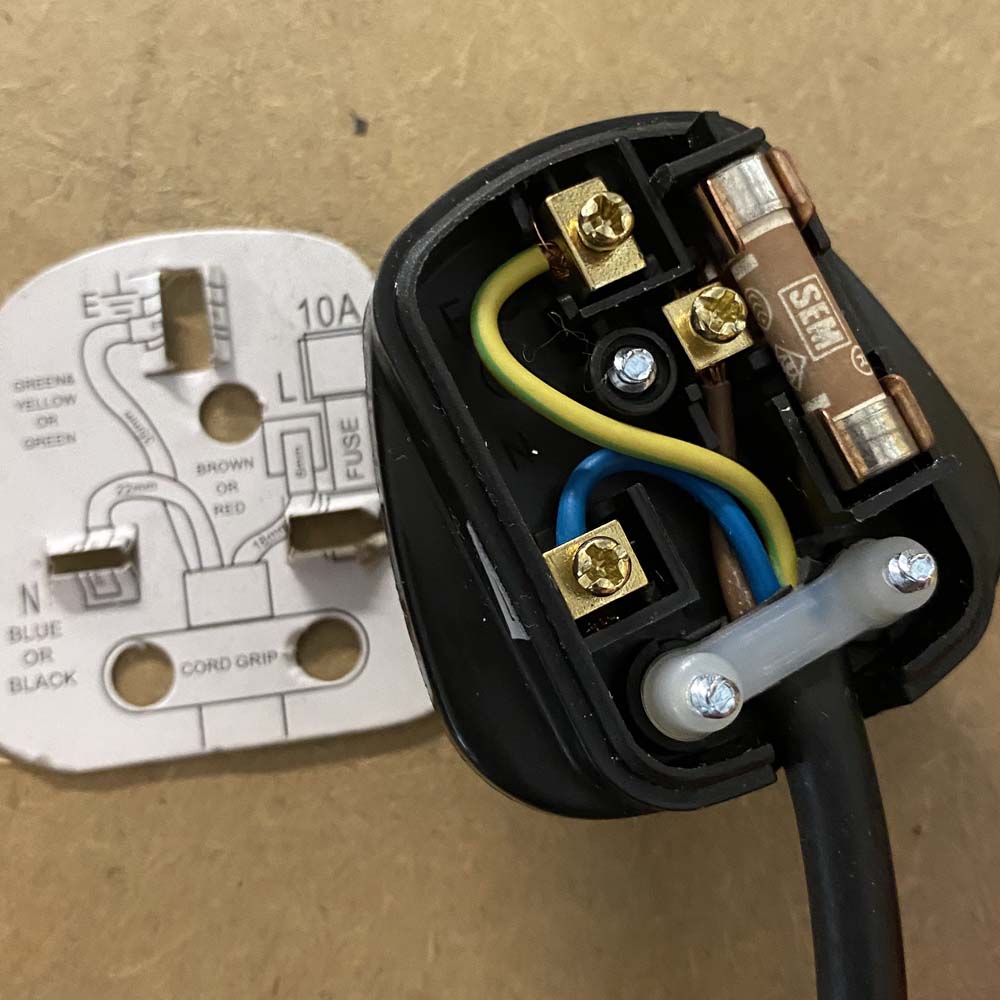 Step 4: You need to put each wire into the appropriate terminal pin, and tighten with the screw to secure the copper in place. Start with the live (brown), then the neutral (blue), and finally the green and yellow (earth). When each is secure, position it in the indents of the plug top so it is neat and tidy.

Then turn the cable grip back to its normal position, and put the screw back in place; tightening both to secure the flexible cable in place.

Finally, before you close the plug make sure the fuse is correct. The image shows a standard 13 amp fuse because that is what came with the plug, but you need to confirm that is sufficient for the appliance before closing up. Check this article on fuse ratings to be sure. Step 5: The final and easiest part is to put the plug top back on, and secure it in place with the screw. You now have a fully wired plug, done correctly and you now know how to wire a plug.

Get a PAT testing quote today

We’re an experienced local PAT Testing company from Newcastle Upon Tyne with over 10 years trading, and have completed over half a million appliance tests. Our engineers are fully qualified, competent, insured and checked by CSCS, DBS and PATTA.

We come to you, anywhere in the North East and most of the UK to inspect and test your electrical equipment, using the latest industry leading equipment; we carry out necessary repairs and issue you with an itemised PAT testing Certificate as a pdf document. We are able to test all types of electrical equipment up to 415volts. We also guide you on the most appropriate retest periods based on your situation.